On the Road: City of North Las Vegas

This week, On the Road is stopping at the City of North Las Vegas, which recently invested more than $2 million on roadway and traffic signal improvements in two areas. 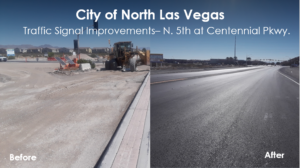 In August 2021, the City of North Las Vegas began significant traffic signal improvements to the intersection at Centennial Parkway and North 5th Street. The improvements included the installation of new traffic signals, new asphalt pavement and the addition of concrete sidewalks for pedestrian safety. The project also included restriping the road and making new utility adjustments.

“This project is located in one of the heaviest residential development areas in North Las Vegas. The completion of the signal at Centennial and N. 5th Street is an excellent addition to our roadway network,” said Dale Daffern, North Las Vegas Director of Public Works. “Working with RTC to expedite design and construction funding made the overall impact to the taxpayer and traveling public minimal. In addition, advanced traffic signal timing changes and allowing adequate roadway closures enabled the contractor to finish the project ahead of schedule and on budget.” 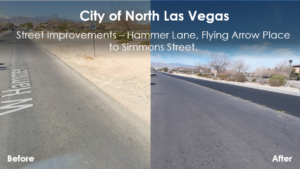 The improvements began in July 2021 and included new asphalt pavement, the addition of concrete sidewalks, restriping of the road, and utility adjustments.

Both of these City of North Las Vegas intersections have a variety of shopping areas and great restaurants to check out. If you are in the area, make sure to check out the shopping center down the street or grab a bite at Winchell’s Pub and Grill near Hammer Lane!