Las Vegas Raiders fans have been waiting anxiously to experience their first in-person NFL season at Allegiant Stadium. And they’ll finally get their chance this fall! Today’s announcement about transportation and parking details to and from the stadium is one step closer to fans being able to conveniently access one of the most technologically advanced stadiums in the United States.

Marc Badain, President of the Las Vegas Raiders, encouraged fans to explore the many options for getting to and from Allegiant Stadium. He emphasized the ease and convenience of being able to access the stadium from Las Vegas Blvd. by walking across the Hacienda Bridge, which will be closed to vehicle traffic on game and major event days.

In addition to taking advantage of 35,000 parking spaces within a one-mile radius of the Stadium, fans attending games at Allegiant Stadium can take public transit and catch the Deuce on the Strip service or use ride share.

For those who prefer to drive, there are 13,000 spaces at multiple lots operated by the Stadium and priced according to proximity to the Stadium. Approximately 22,000 spaces are also located at nearby resort properties and neighboring businesses.

“We encourage those who wish to drive and park their own vehicles to allow plenty of time to get to the Stadium, particularly at the beginning of the season as they become familiar with the area, including streets that will become one-way on game days,” said Badain. “We also encourage those who wish to park near the Stadium to purchase parking in advance as day-of-event parking may not be available.”

For those who take rideshare services, there are four rideshare lots on the east, south and northwest sides of the Stadium, making it a good option from multiple directions. A dedicated space west of the Stadium is also available for taxis, shuttles, and general drop-off and pick-up before and after games. 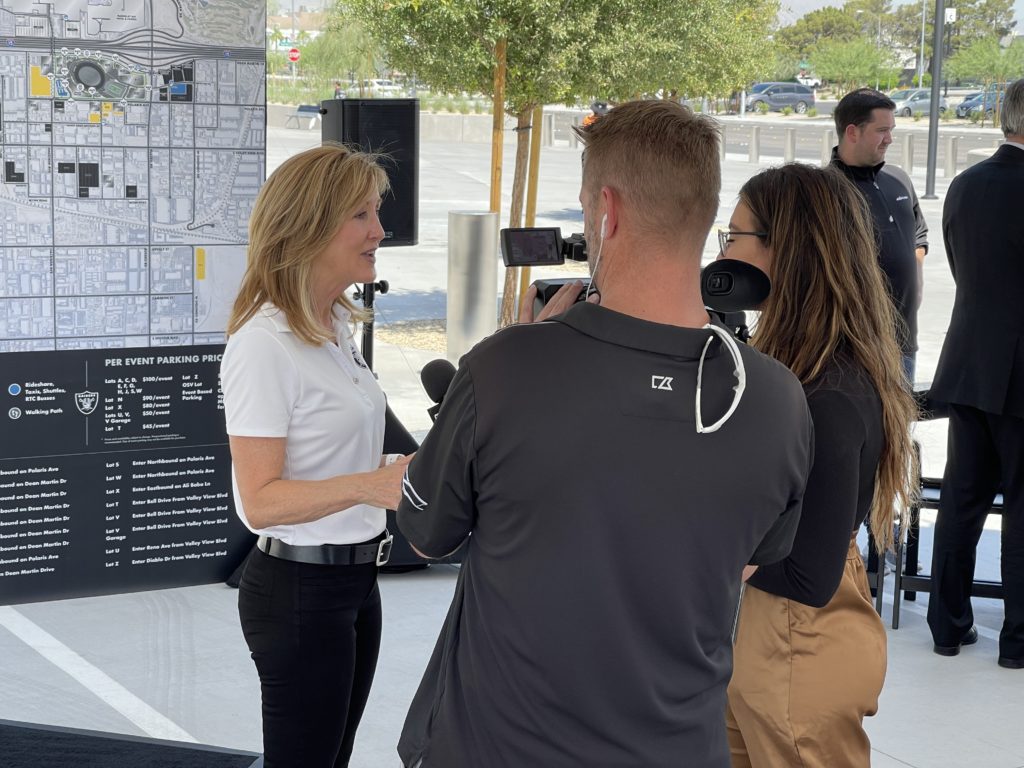 And for transit riders, our own RTC CEO, MJ Maynard, says the Deuce on the Strip service is well positioned to help Stadium-goers with their transportation needs.  “The RTC’s popular, double-decker Deuce buses run 24/7 on the Las Vegas Strip every 15 minutes from 57 stops, including a stop nearest Hacienda Bridge at Mandalay Bay,” she said. “That makes the Deuce an easy, efficient and economical way for visitors and locals to get to the Hacienda Bridge regardless of where they are on the Strip.”

So for those who attend games and events at Allegiant Stadium, there are plenty of parking and transportation options. Just plan in advance and include extra travel time.

For more information about parking and tailgating locations, pricing and walking distances to the Stadium, visit https://www.allegiantstadium.com/plan-your-visit/directions-parking.

For bus fares and schedules, including The Deuce, visit https://www.rtcsnv.com/ways-to-travel/schedules-maps/.