Have you seen complete streets in the community?

A growing number of communities are discovering the value of roads as important public spaces for all users including people who drive, walk, ride transit or ride a bicycle.

In 2013, we worked with all of the local jurisdictions (Clark County and the Cities of Las Vegas, City of Las Vegas, City of North Las Vegas, Henderson, Mesquite and Boulder City) to formulate and adopt the Complete Streets Design Guidelines to encourage streets to be a safe space that serves the needs of all community members.

Complete Streets not only make walking, biking and riding public transit safer for everyone, but they also reduce congestion, improve air quality and increase the quality of life of residents and visitors by providing safe, convenient and comfortable transportation choices.

Most recently, Clark County expanded its commitment to Complete Streets by passing the Safer Sidewalk Ordinance that would require roadways that are 60 feet or wider to have detached sidewalks. Detached sidewalks provide a landscaped buffer between roadways and walking paths to provide a much-needed separation for walkability in neighborhoods, as well as offer an added aesthetic benefit.

Check out these major street improvements along Fort Apache Road, between Alexander Road and the 215 from Clark County. These upgrades boasted major improvements for pedestrian safety such as adding bike lanes, bike buffers, which provide additional space between drivers and bicyclists, landscaped median islands and detached sidewalks. 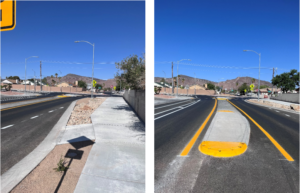 Or check out the detached sidewalk on Alta Drive in the City of Las Vegas found below. 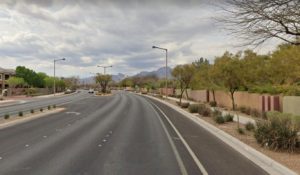 The RTC contributes to the funding of complete streets alongside our six member agencies and with contributions from the community.

For more information on Complete Streets, check out: https://www.rtcsnv.com/projects-initiatives/initiatives/complete-streets/.