On the Road: Mesquite

This week, On the Road is visiting the City of Mesquite, which recently invested $4.7M on roadway improvements and street extensions on two projects.

The project wrapped up in February 2022 with a $3M investment and included nearly 1.3 miles of road grading, additions of curbs, gutters, sidewalks, and streetlights. 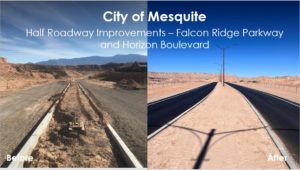 As a direct result of these new roadways, Mesquite has been able to welcome new housing to the area and two new businesses: A truss manufacturing company and a dog boarding, daycare and grooming center.

With the improvements to Falcon Ridge Parkway and Horizon Boulevard, the City of Mesquite was also able to provide another access point to Sun City – Anthem when there was previously only one. This allows residents a shorter drive to various locations in town and also allowed shorter response times for emergency vehicles. This has proven to be a very valuable and worthwhile project to the Mesquite community.