On the Road: City of Henderson

On the Road highlights recently completed construction projects on our roadways. The series features the RTC, partner agencies, and our contractors who are working to improve mobility and enhance safety as we continue to fund roadway maintenance and improvement projects.

In this week’s On the Road, we will be diving into the City of Henderson, which invested more than $3.5 million in roadway and pedestrian improvements that create safer spaces for pedestrians, transit users, and drivers alike.

“Community safety is the number one priority for the City of Henderson, and our rating as the 2nd safest large city in America reflects our level of commitment to that goal,” said Debra March, Mayor of the City of Henderson and RTC Chairwoman. “The street improvement projects highlighted are a part of our continual city-wide effort to ensure that our roadways are as safe as possible for all who use them – drivers, pedestrians, bicyclists, transit users and others.”

The following are just a few of the improvement projects that the City of Henderson has developed to update roadways that meet the needs of the community.

In June of 2021, the City of Henderson kicked off a major roadway update on Paseo Verde Pkwy. The project included much-needed pedestrian safety updates including the addition of bike lanes, designated lane markers and updated sidewalks. These improvements have allowed for safer roadway usage for all travelers.

This project was completed in September of 2021. 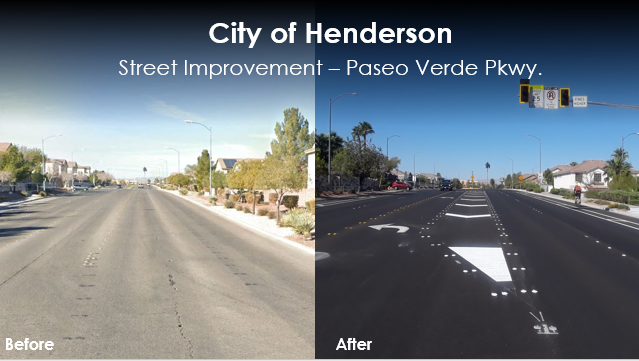 Additionally, the City of Henderson completed the Roma Hills Complete Streets improvements, which began back in November of 2020. The street improvement provided the community with well-defined lane markers, new medians, designated crosswalks and stoplights to help improve pedestrian and driver safety.

This improvement project stretches from Horizon Ridge Pkwy all the way to Ascaya. 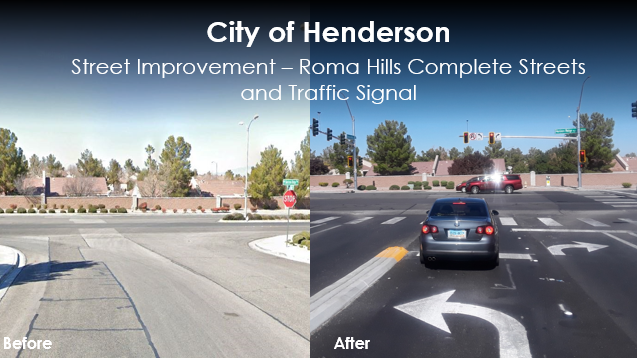