On the Road: City of Henderson

This week, On the Road is visiting the City of Henderson, which recently invested more than $13 million on roadway and traffic signal improvements in two areas. 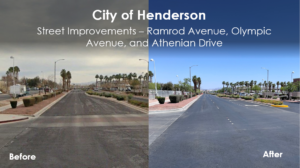 The first project included repaving Ramrod Avenue and Olympic Avenue between Green Valley Parkway and Mountain Vista Street, as well as Athenian Drive. The project wrapped up in May with upgrades to LED streetlights and sidewalk ramps, re-painting pavement markings, and making traffic signal modifications. 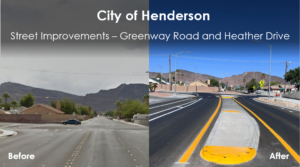 The second project focused on street improvements along Greenway Road and Heather Drive.

“The City of Henderson is balancing the needs of all those who use our roadways with these improvements, which replace rough asphalt, include high-efficiency lighting, and enhance pedestrian safety and access,” said Mayor Debra March.

Both of these City of Henderson areas feature great places to check out for some weekend fun. If you are in the area, make a day out of it and head over to Mission Hills Park near Mission Drive. Celebrate the last days of (Vegas) summer by visiting the park’s splash pad area. If you happen to be by Olympic Avenue, stop by the Ethel M Chocolates Factory for a chocolate tasting experience and a walk around the botanical cactus garden.