COVID-19 inspired millions to get outdoors. Now we must keep them safe.

Let’s face it, we watched a lot of Netflix during COVID-19. But it turns out millions of people also developed healthy habits, like getting outside to walk, run, and ride bikes. Research shows that engaging in new or resuming active pursuits occurred at a higher rate in urban areas like Las Vegas.

According to the Outdoor Industry’s recently released New Participant report, in 2020, more people than ever before were motivated by outdoor recreation opportunities within 10 miles of their home. The top three activities were walking, running, and bicycling. And vaccines won’t put an end to these newfound passions. The report states that more than 60 percent of people intend to stick with it even after restrictions lift.

This means our post-pandemic streets will look a lot different.

“Bicycle and pedestrian safety continues to be a challenge in Las Vegas,” said Sargent Michael Campbell of CCSD Police Department. “This isn’t a one size fits all problem. It’s going to take a village to get to our goals of zero fatalities.”
That’s why on Monday, April 5, Southern Nevada Bicycle Coalition (SNVBC) teamed up with CCSD, North Las Vegas, and Las Vegas Metro Police Departments, and the Nevada Office of Traffic Safety for a law enforcement event to raise awareness of Nevada’s 3-Feet law (NRS 484B.270). Nevada is one of 33 states to enforce a 3-Feet law and one of five states whose law specifies that motorists should move into an adjacent lane to the left if the lane is available when passing a cyclist. 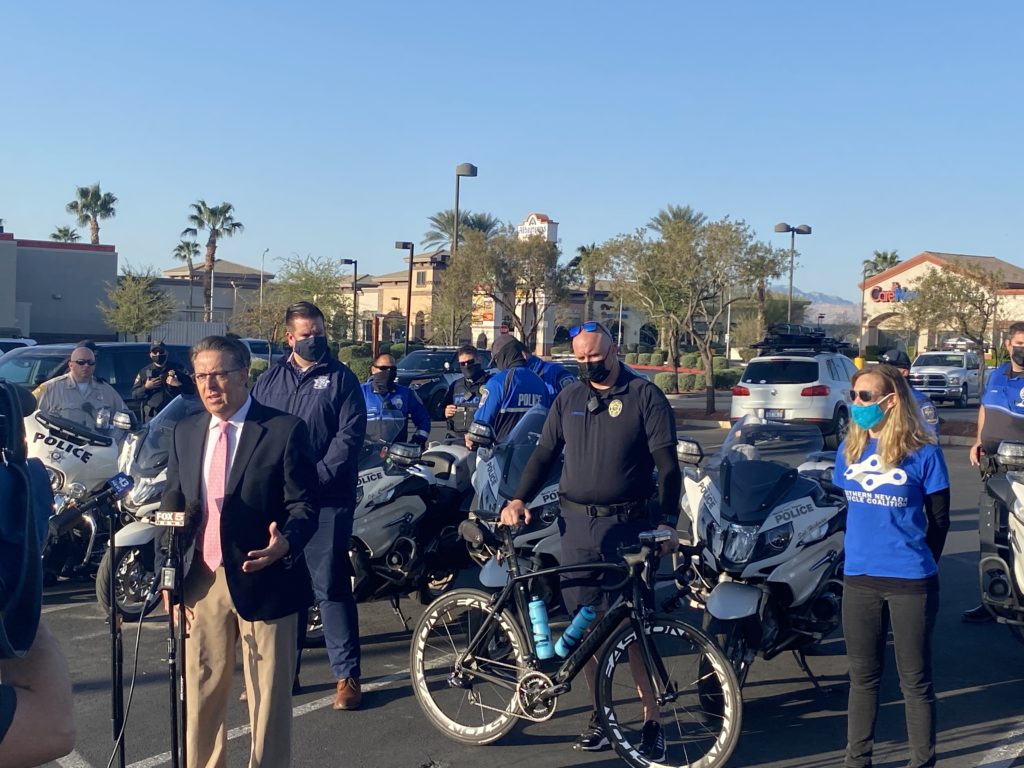 During the three-hour law enforcement event, a cyclist officer patrolled an area from Simmons/Aliante and Ann Rd to the 215. More than 80 motorists violated the 3-Feet/Move Over law; 65 were stopped, and 53 citations were issued to drivers. Some vehicles were too close for comfort, like a car that was 15″ from the officer. Others were downright terrifying, like a gravel truck that was reported being only 26″ from the officer’s bicycle.

SNVBC’s recently launched an education campaign, Change Lanes for Bikes. It’s the Law! which was inspired to protect cyclists. Especially given this new data, SNVBC wants to see all vulnerable road users protected. And statistics show it’s worth everyone’s time to be more mindful.

“I’ve worked in traffic safety for over 12 years, and we’ve lost over 6,000 people on our roadways,” said Andrew Bennett, Nevada Office of Traffic Safety. “It’s imperative we watch out for each other. The ultimate goal is zero fatalities.”

During 2020, we quickly learned new habits to keep one another safe, like staying six feet apart. Now, drivers and cyclists must work together to achieve zero fatalities.

“As a cyclist, I need to obey the laws of the road to be safe and aware,” said North Las Vegas Councilman Scott Black. “All cyclists need to do their part. It’s a shared responsibility.”

Perhaps Bennett sums it up best. “This isn’t a cyclist vs. car thing. We’re in this together.”