Click the slider tab to view the before and after renderings of Maryland Parkway!

Thank you for participating in our survey!

Maryland Parkway is a vital corridor for the Las Vegas Valley, extending from the South Strip Transit Terminal in the south to the Las Vegas Medical District in the north. Investments in transportation infrastructure are expected to improve mobility and safety along the corridor for all users, including drivers, bicyclists, pedestrians and transit customers, while enhancing access to the surrounding areas. This project will include expanded transit service along Maryland Parkway Bus Route 109, enhanced transit stations, shared bus-bike lanes, wider sidewalks, and improvements to lighting and landscaping. To learn more, click around on our interactive project map.

This corridor is home to 90,000 residents and provides 80,000 jobs, while carrying approximately 9,000 transit riders and 35,000 vehicles daily. It also includes 25 transit route connections, nine of which are the busiest in the valley.

Preliminary engineering and design began in October 2020 with plans for the public to review and provide input before the final design is scheduled to be completed in early 2023. Construction is anticipated to begin in 2023 subject to federal funding availability, with completion in 2025.

The project will include 50 enhanced transit shelters, shared bus-bike lanes, widened sidewalks and upgraded pedestrian crossings, landscape enhancements and new lighting. The expanded Bus Route 109 service will also include additional buses to shorten wait times. To see the corridor improvements in more detail, check out our before and after photo slider!

To stay updated on this exciting project, get updates on the design progress and attend future public meetings and events, sign up for email updates.

The proposed Maryland Parkway Project will include a 13-mile BRT route that extends the current Maryland Parkway Bus Route 109 service to the South Strip Transit Terminal in the south and to the Las Vegas Medical District in the north.

As a part of this project, 50 new transit shelters are being designed to enhance comfort, safety, and security for all users. Shelters will feature new seating, lighting, and shade elements. Two transit shelter concepts have been designed, and we need your feedback! Click below to provide your input on which shelter elements you like best.

Can the ads be replaced with route information?

The ad panels at our stops are typically a mix of service information and paid advertising.

Will there be outlet/USB charging stations?

Due to maintenance issues, we don’t anticipate including charging stations at bus stops. We do provide them at our Bonneville Transit Center and South Strip Transit Terminal at each end of the route.

Do you consider how you will clean the shelter when designing?

The ease of cleaning up spills, graffiti and other materials is a prime factor when considering construction materials for our transit shelters.

The shelters seem solid. Is there any visibility through them?

The back and side panels would be made from a perforated material to provide visibility through and behind each shelter.

Will there be active security monitoring at bus stops?

In addition, the RTC’s transit security is strategically deployed throughout the transit system.

As always, we also take input from customers regarding security and other concerns through the Transit Watch feature on our rideRTC mobile app.

Can there be different kinds of shade structure on each side of the street for how the sun hits the shelter?

While most of the locations will have similar sun exposure, we are considering site specific design features to maximize passenger comfort. The transit shelters are being designed with larger overhead canopies and other features to provide more shade. And where space is available, we are adding street trees and other landscaping features to improve comfort, whether you’re walking to and from the stops or waiting for your bus.

Can you add shade appliances, like they have at parks, for shelters?

We appreciate this input and will look into it as we continue with shelter design.

Why add additional plants in the median when we are in a water crisis?

All plants will be selected from the Southern Nevada Water Authority approved plant list, which use minimal water. Trees and plants serve multiple purposes including shade, air quality, aesthetics and traffic calming.

Can you add bench seating with full back support?

We will include this suggestion as we finalize the seat design.

Can the service run down the middle of the road?

While the center-running concept was an initial recommendation from the Alternatives Analysis, the side-running concept was ultimately selected and approved as the most appropriate for this corridor. This was based on a number of considerations through the environmental process.

Can we consider bike parking or bike racks near large retail stops to encourage more bike use?

While we don’t own the right of way, we will take this into consideration and look for opportunities to include bike racks and/or RTC Bike Share docks at high activity locations if there is available space.

Will there be green lanes for cyclists?

There will not be green bike lanes; rather, shared bus-bike lanes will be available for cyclists and buses, which have shown to be successful in other communities and should provide better comfort for everyone. We are evaluating the pavement treatments for these lanes.

The wider lanes give cyclists more space to ride together and increase the distance from cars. As is required by Nevada law, RTC’s bus operators will change lanes to pass cyclists.

How will you accommodate all the traffic on the roadway if you change a travel lane to a shared bus-bike lane?

The Maryland Parkway BRT Project includes two primary features to keep traffic moving while improving access for everyone, whether they are walking, cycling or riding transit. The shared bus-bike lanes will keep buses and bikes out of the way of traffic while still allowing motorists to use them for right turns.  We are also adding extra right turn lanes at major intersections for extra capacity.

While the right-most lane of Maryland Parkway already acts as a defacto right turn lane, making it exclusive to right turns only will both preserve its current use and allow for a more efficient transit system and a safer space for cyclists.

A traffic analysis was performed to confirm that the updated roadway design can accommodate existing and projected traffic adequately.

Why isn’t there a protected bike lane?

hout the corridor, allows for more sidewalk space for pedestrians and reduces conflicts.

The shared bus-bike lanes will keep buses and bikes out of the way of traffic while still allowing motorists to use them for right turns. We are also adding extra right turn lanes at major intersections for extra capacity. 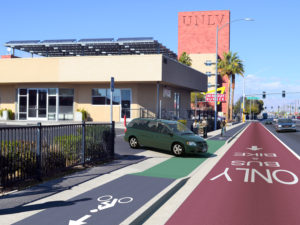 Instead of a shared bus-bike lane that will get ignored by cars, why not use a shared pedestrian-bike lane?

While bike lanes help serve as a refuge from cars, they are also travel lanes meant to efficiently move cyclists. Combining pedestrians with cyclists in crowded urban areas can work against the efficient movement of both people and bikes.

Is there room for a 3-foot buffer between the transit lane and sidewalk?

By moving cyclists to the shared bus-bike lane, in most locations, we gave space to put a 5-foot wide amenity zone that will include trees, streetlights, fire hydrants and sidewalk. This will allow more space for people to walk while creating a buffer between the sidewalk and shared bus-bike lane.

Is light rail still an option?

There is currently not enough funding to support the much higher costs to build, operate and maintain a light rail system. Bus Rapid Transit (BRT) was chosen as a more cost-effective approach to improve transit service along Maryland Parkway.

Will there be handicapped curbs in front of the shelters?

This project will be designed and constructed to current Americans with Disabilities Act (ADA) standards. This includes ramps at intersections, driveways and designated pedestrian crossings.

Are there any sound or sight indicators for people with disabilities?

We appreciate this input and will look into it as we continue with the shelter design. This project will be designed and constructed to current Americans with Disabilities Act (ADA) standards.

Park and ride access is available at the South Strip Transit Terminal at the southern end of the corridor.

Why the Medical Center? Why not the Bonneville Transit Center (BTC)?

The Maryland Parkway BRT corridor extends from the South Strip Transit Terminal in the south to the Las Vegas Medical District in the north. This corridor is home to 90,000 residents and provides 80,000 jobs, while carrying approximately 9,000 riders and 35,000 vehicles daily. It includes 25 transit route connections, nine of which are the busiest in the valley.

Where does the service start and end?

The Maryland Parkway BRT corridor extends from the South Strip Transit Terminal in the south to the Las Vegas Medical District in the north. This corridor is home to 90,000 residents and provides 80,000 jobs, while carrying approximately 9,000 riders and 35,000 vehicles daily. It includes 25 transit route connections, nine of which are the busiest in the valley.

Will there be off-board fare collection and level boarding?

Off-board fare collection will be provided as it is today through the various mobile apps including rideRTC, Transit, Uber and Lyft. While there will be near-level boarding to make it easier for customers to get on and off the bus, bus operators will deploy ramps to ensure access for those with mobility devices, consistent with the requirements of the Americans with Disabilities Act.

Will this project include traffic signal priority?

Yes, we are planning to upgrade the traffic signal equipment at many of the intersections and use the latest technologies to provide faster service for our buses through transit signal priority.

Why not focus on getting people from the outskirts of town into the middle of town, a REAL commute. Instead of pouring money into north/south hops, and short distances.

The RTC also operates several express routes into the middle of town, including the Boulder Highway Express, Centennial Hills Express, and the Downtown & Medical Center Express.

Is this behind schedule? Why couldn’t you make these updates when the roadway was paved in 2018/2019?

The project is not behind schedule. In order to receive federal funding, the Maryland Parkway BRT Project went through an environmental process, and no federal funding could be spent on the project until that process was complete. In Dec. 2019 we received the Finding of No Significant Impact (FONSI) and in January 2020 the project advanced from planning to project development.

Despite the impact of the pandemic, there has been an extensive amount of work to coordinate among jurisdictions and utilities on design, funding, simultaneous projects and schedules.

In May of this year the RTC submitted its application to the Federal Transit Administration for up to $150 million in Capital Investment Grant Small Starts funding. We expect to be notified by the first quarter of 2023 if we qualify. Construction is contingent upon federal funding availability.

Transit-Oriented Development (TOD) is a type of development located close to high quality, high capacity transit, that creates a compact, walkable, mixed-use and dense environment. One of the goals of the Maryland Parkway project is to spur transit-oriented development (TOD) in the Las Vegas Valley. The TOD Plan will evaluate the development around the new transit shelters along the corridor. You can learn more about TOD here.

To provide the best experiences, we use technologies like cookies to store and/or access device information. Consenting to these technologies will allow us to process data such as browsing behavior or unique IDs on this site. Not consenting or withdrawing consent, may adversely affect certain features and functions.